Occasionally my mind travels in weird loops instead of the normal linear process that most people enjoy. It’s not all bad. Sometimes I get an idea out of the blue and run with it. This morning it was shark cages.

Now I didn’t say Shark Tank like the popular TV show. I said, shark cages, you know like the metal ones they drop into the ocean with humans inside who want to ‘swim with the sharks’? Crazy mofo’s is all I’m saying there. But nonetheless, the idea of shark cages kept darting at my brain like a moth to the softball field lights at Wolffs Softball Haven during the late games of league. 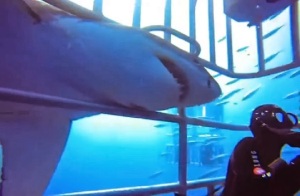 Shark cages. How much does a ‘nice’ shark cage cost? How much does a cheap shark cage cost for that matter? Who makes a quality product and who has negative reviews (if they survived to post about it)? Can I get one on Amazon.com and get free two day shipping with my Prime membership? Does it come pre-assembled or is there like an 80-page booklet of instructions to go with 361 unique parts to put together? Do they offer an extended warranty?

With the miracle of Google, I was able to cultivate some rough information but most of it is skewed towards people just wanting the dive experience with a company that has existing cages. For example, this one company near San Francisco offers a special $825 price per diver in the cage (max 4 people in cage) but they also do not guarantee that you will see a shark. No refunds for shark no-shows or equipment malfunctions (air tank failure? boat sinks?) to boot. Although, for that $825 price it included a boat charter, time in the water (in the cage) and wet suit with air tank rental. So all-in-all that seemed like a decent time unless Megalodon comes along and swallows your cage with you safely still inside! In hopping from site to site, I did see one place overseas that offered “kids swim for free” (in the cage). Sounds like a great traumatic experience for impressionable young minds!

But eventually I did find some rough pricing for buying a cage. Depending on what size and what bells and whistles you wanted, you could get a ‘personal’ cage for about $8000 and other more industrial cages went for about $25,000. The caveat being that you needed to have a vessel capable of first hauling, then dropping and withdrawing the cage from the ocean.

Hopefully you found this post both informative and enlightening. If you were on the fence about purchasing a shark cage or swimming with the sharks and this piece didn’t sway you one way or the other, perhaps watch the movie 47 Meters Down.

That was me underwater saying to have a great day.

I would like to start off today’s blog with a classic joke:

When I die, I want to go peacefully like my grandfather did – in his sleep. Not yelling and screaming like the passengers in his car.

This borrowed joke lends itself to my dark tinged humor. It points out that you never know when your tether to this world may disengage (unless you have a suicide schedule or are being drug down to the depths by a Great White shark or are in a plane with the fuel gauge on Empty at 30,000 feet or a myriad of other certain death scenarios). Your ticket could be punched in 1 minute or 75 years from now. Truth.

With that on the table, I like to play softball.

Did I just jump the track on you? Let me explain.

I frequently play slow pitch softball which is a cousin to baseball and a step or two below fast pitch softball. Each has its own echelon of players ranging from the ridiculously great to the solid skill players and then the average and of course the hopelessly terrible. Depending upon the day, I think I fall into the average to hopelessly terrible categories. But skill level is really irrelevant for this piece. The game itself is my parallel for life.

Sometimes you are playing with your team in your comfort zone and your team is winning and everything is peaceful, maybe even joyous. You chip in a few hits, nothing spectacular but contributing. You aren’t hurting your team on defense either. Making a play or two, nothing highlight reel but coasting along to a team win. Good times. Then other times that same team is struggling. The pitcher is walking alot of the other team’s hitters. The fielders are dropping fly balls or making bad throws and your team just can’t string together hits to score enough runs. Guys (or gals) start trying to do things they normally don’t do (like learning to hit opposite field after being nothing but a dead pull hitter or trying to drop bombs aka hit home runs) and the unraveling process speeds up and you lose. Normally softball games are seven innings in length but if your team plays poorly enough you can get short-gamed (aka mercy ruled) when the other team puts up so many runs by a designated inning and you have very few in comparison. Thus invoking the mercy of ending the awful showing – with (So You Had A) Bad Day by Daniel Powter playing softly in the background.

Sometimes life invokes it’s own mercy rule. Maybe it occurs after a bad call was made and no one looked at the replay to say hey that’s not right but those are the breaks. So when life gives you a bad hop to the chest or you pull your glove up too soon on a grounder or your home run curves foul or you simply are left standing in the on deck circle as that last out is recorded when you know you had one more hit in you – take a breath and appreciate the scene. Chances are, what the landscape looks like today, will change by tomorrow even if it is only a slight change. Everyday you are here, those slight changes will evolve until the picture is completely different. 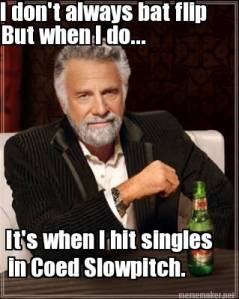 In life or on the softball field, you have your friends who you want to see do well and you cheer for them or pat them on the back for encouragement after an error or a bad at-bat. But on the flipside, there are those whom you dislike alot and you try to give a little extra effort or mental focus to beat. It’s pretty easy to overlay that template in life – wanting the positive for the perceived’ good guys’ and pulling for the dreaded Wolff’s Softball Haven bad infield hop to the throats of hated ‘bad guys’. 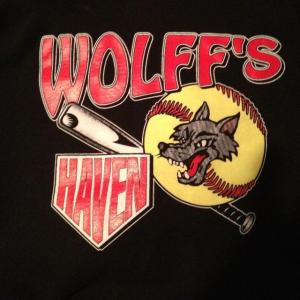 So put on your fielding glove or batting gloves and go play. The score doesn’t matter. Winning and losing doesn’t matter. Just be there in the moment and enjoy it because when the game is over, it’s over.

In case I do not see you any further tomorrows, I thank you for reading and maybe smiling or nodding at the sentiments.

Peace and love my friends. 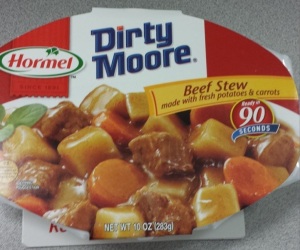 Promo: Is your belly grumbling? Enjoy a mouthful of reconstituted Dirty Moore Beef-like Stew! It’s the best you ever tasted! Now in blueberry flavor! A little cigar ash added for flavor and fiber! Find it in the far, dark corners of your lesser trusted supermarkets near the dumpsters!

AP Chuckles: Here we are back from commercial break. We have in studio Scott Latta, a dynamic Scott based right here in America. Scott we are going to move on to the speed round with some questions submitted by our listeners via email, text and tweet.

Me: Alright let’s do this. I’ve rolled up my sleeves and I have this industrial size bottle of Rum Chata to help me through this final segment.

Me: Well sight unseen I am going to have to respectfully decline the DDA mostly on the grounds that I am presently in a relationship and also I am a minimalist when it comes to body hair but good to know I have crossover appeal.

AP Chuckles: HermieLovesRudolph from the North Pole wants to know if you would accept a gift of all of his unused tanning products and use them?

Me: Two part question – I like it. First, I may accept the gift but for the second part I doubt I would use the products myself. I may re-gift them to someone in a pinch as it tis the season. Anyone who knows me knows I have skin the same color as the underbelly of a Great White shark!

AP Chuckles: We have a tweet from ZeldaPrincess wanting a copy of everything you have ever written sent to her AOL email.

Me: I’m sensing a bit of a retro personality here. Most of what I have is terrible poetry plus about a dozen unfinished stories and scores of annoying Top Ten lists. But hey, if you want them that bad I will post them on my website or you can tweet me direct your email. @oohaw is my Twitter handle.

AP Chuckles: We have a text from Timmy in Alberta Canada wants to know who your favorite wrestler is?

Me: Ha! I have watched wrestling off and on for the better part of 30 years. My all-time favorite is…The Undertaker followed closely by the late Randy Savage.

AP Chuckles: FrozenAnna asks from her iPad in Mrs. Carusso’s third grade class in California – if you were President of the United States what would be the first thing you would do?

Me: I would go on national TV interrupting all the highest rated prime time shows thanking the country for all the write-in votes.

AP Chuckles: SoftballCheaterBatGuy tweets: What bat brand and ounce do you use when you play?

Me: Ha. SoftballCheaterBatGuy is an awesome handle. Makes me think of guys smaller than me like Urfer and Sunshine who crush the ball. Not saying they cheat, just that I’m jealous of their skills. My present bat is a Worth Legit orange and gray 27 ounce.

AP Chuckles: DynamiteEyes sent a text asking you to pick three of these five things, if forced, you would drink: half a bottle of room temperature Jack Daniels, a sugar free Monster energy drink, a cup of Heidi Klum’s urine, 10 shot glasses of tabasco and 5 ounces of boiling water.

Me: Yikes. But I appreciate the creativity. Process of elimination: I remove the boiling water just for the blistered mouth and throat aspects. Then its down to the Tabasco and Heidi’s urine for the last elimination. If Heidi is drinking her daily allotment of liquids for that day that is a tall order. So I would probably be stuck taking the tabasco shots.

AP Chuckles: And finally, BFF3000 asks what movie do you like to watch when you are sick?

Me: Good question. There are actually three answers here depending upon my mood: Major League, Office Space or Deep Blue Sea.

AP Chuckles: Well Scott I’d like to thank you for taking some time with us and our listeners. Maybe we can have you back in the future after you have actually done something.

Me: Sure thing. No pressure.

AP Chuckles: Now as a treat for our loyal listeners we will play a 72 hour non-stop Barry Manilow marathon.